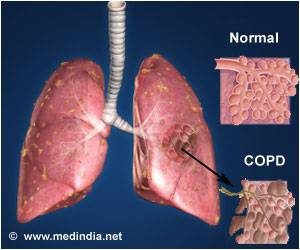 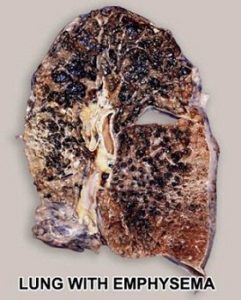 Usually due to smoking

This is Healthy Lung Month covering COPD.  What is Chronic Obstructive Pulmonary Disease?

Chronic obstructive pulmonary disease (COPD) is a term that applies to patients with chronic bronchitis, bronchiectasis, emphysema and, to a certain extent, asthma. A brief review of normal functional anatomy will provide a background for the discussion of pathology.

The airway down to the bronchioles normally is lined with ciliated pseudo-stratified columnar cells and goblet cells. Mucus derives from mucus glands that are freely distributed in the walls of the trachea and bronchi. The cilia sweep mucus and minor debris toward the upper airway. Low humidity, anesthesia gases, cigarette smoking and other chemical irritants paralyze the action of these cilia. The mucociliary action starts again after a matter of time. This is why people awaken to “smokers cough.”

“Chronic obstructive pulmonary disease (COPD) is a term that applies to patients with chronic bronchitis, bronchiectasis, emphysema and, to a certain extent, asthma.”

Bronchi run in septal connective tissue, but bronchioles are suspended in lung parenchyma by alveolar elastic tissue. The elastic tissue extends throughout alveolar walls, air passages, and vessels, connecting them in a delicate web. Bronchiolar epithelium is ciliated, single-layered and columnar or cuboidal. Beyond the bronchioles the epithelium is flat and lined with a film of phospholipid (surfactant), which lowers surface tension and thereby helps to keep these air spaces from collapsing. Remember that the phospholipid develops during later gestation in utero. This is the reason why premature infant’s lungs cannot stay inflated without the addition of surfactant therapy. Macrophages are found in alveolar lining. Smooth muscles surround the walls of all bronchi, bronchioles, and alveolar ducts and when stimulated they shorten and narrow the passages. Cartilage lends rigidity and lies in regular horse-shaped rings in the tracheal wall. Cartilage is absent in bronchi less than 1 mm in diameter.

The terminal bronchiole is lined with columnar epithelium and is the last purely conducting airway. An acinus includes a terminal bronchiole and its distal structures. Five to ten acini together constitute a secondary lobule, which is generally 1 to 2 cm in diameter and is partly surrounded by grossly visible fibrous septa. Passages distal to the terminal bronchiole include an average of three but as many as nine generations of respiratory bronchioles lined with both columnar and alveolar epithelium. Each of the last respiratory bronchioles gives rise to about six alveolar ducts, each of these to one or two alveolar sacs, and finally each of the sacs to perhaps seventy-five alveoli. Alveolar pores (pores of Kohn) may connect alveoli in adjacent lobules.

Two different circulations supply the lungs. The pulmonary arteries and veins are involved in gas exchange. The pulmonary arteries branch with the bronchi, dividing into capillaries at the level of the respiratory bronchiole, and supplying these as well as the alveolar ducts and alveoli. In the periphery of the lung, the pulmonary veins lie in the interlobular septa rather than accompanying the arteries and airways. The bronchial arteries are small and arise mostly from the aorta. They accompany the bronchi to supply their walls. In some cases of COPD, like bronchiectasis, extensive anastomoses develop between the pulmonary and bronchial circulations. This can allow major shunting and recirculation of blood, therefore contributing to cardiac overload and failure. Lymphatics run chiefly in bronchial walls and as a fine network in the pleural membrane. The lumina of the capillaries in the alveolar walls are separated from the alveolar lining surfaces by the alveolar-capillary membrane, consisting of thin endothelial and epithelial cells and a minute but expansile interstitial space. This interface between air and blood, only 2 microns in thickness, is the only place where gases may be exchanged effectively.

Chronic bronchitis is a clinical disorder characterized by excessive mucus secretion in the bronchi. It was traditionally defined by chronic or recurrent productive cough lasting for a minimum of three months per year and for at least two consecutive years, in which all other causes for the cough have been eliminated. Today’s definition remains more simplistic to include a productive cough progressing over a period of time and lasting longer and longer. Sometimes, chronic bronchitis is broken down into three types: simple, mucopurulent or obstructive. The pathologic changes consist of inflammation, primarily mononuclear, infiltrate in the bronchial wall, hypertrophy and hyperplasia of the mucus-secreting bronchial glands and mucosal goblet cells, metaplasia of bronchial and bronchiolar epithelium, and loss of cilia. Eventually, there may be distortion and scarring of the bronchial wall.

Asthma is a disease characterized by increased responsiveness of the trachea and bronchi to various stimuli (intrinsic or extrinsic), causing difficulty in breathing due to narrowing airways. The narrowing is dynamic and changes in degree. It occurs either spontaneously or because of therapy. The basic defect appears to be an altered state of the host, which periodically produces a hyperirritable contraction of smooth muscle and hypersecretion of bronchial mucus. This mucus is abnormally sticky and therefore obstructive. In some instances, the illness seems related to an altered immunologic state.

Histological changes of asthma include an increase in the size and number of the mucosal goblet cells and submucosal mucus glands. There is marked thickening of the bronchial basement membrane and hypertrophy of bronchial and bronchiolar smooth muscle tissue. A submucosal infiltration of mononuclear inflammatory cells, eosinophils and plugs of mucus blocks small airways. Patients who have had asthma for many years may develop cor pulmonale and emphysema.

Pulmonary emphysema is described in clinical, radiological and physiologic terms, but the condition is best defined morphologically. It is an enlargement of the air spaces distal to the terminal non-respiratory bronchiole, with destruction of alveolar walls.

Although the normal lung has about 35,000 terminal bronchioles and their total internal cross-sectional area is at least 40 times as great as that of the lobar bronchi, the bronchioles are more delicate and vulnerable. Bronchioles may be obstructed partially or completely, temporarily or permanently, by thickening of their walls, by collapse due to loss of elasticity of the surrounding parenchyma, or by influx of exudate. In advanced emphysema, the lungs are large, pale, and relatively bloodless. They do not readily collapse. They many contain many superficial blebs or bullae, which occasionally are huge. The right ventricle of the heart is often enlarged (cor pulmonale), reflecting pulmonary arterial hypertension. Right ventricular enlargement is found in about 40% of autopsies of patients with severe emphysema. The distal air spaces are distended and disrupted, thus excessively confluent and reduced in number. There may be marked decrease in the number and size of the smaller vascular channels. The decrease in alveolar-capillary membrane surface area may be critical. Death may result from infection that obliterates the small bronchi and bronchioles. There is often organized pneumonia or scarring of the lung parenchyma due to previous infections.

Classification of emphysema relies on descriptive morphology, requiring the study of inflated lungs. The two principal types are centrilobular and panlobular emphysema. The two types may coexist in the same lung or lobe.

Centrilobular emphysema (CLE) or centriacinar emphysema affects respiratory bronchioles selectively. Fenestrations develop in the walls, enlarge, become confluent, and tend to form a single space as the walls disintegrate. There is often bronchiolitis with narrowing of lumina. The more distal parenchyma (alveolar ducts and sacs and alveoli) is initially preserved, then similarly destroyed as fenestrations develop and progress.

The disease commonly affects the upper portions of the lung more severely, but it tends to be unevenly distributed. The walls of the emphysematous spaces may be deeply pigmented. This discoloration may represent failure of clearance mechanisms to remove dust particles, or perhaps the pigment plays an active role in lung destruction. CLE is much more prevalent in males than in females. It is usually associated with chronic bronchitis and is seldom found in nonsmokers.

Panlobular emphysema (PLE) or panacinar emphysema is a nearly uniform enlargement and destruction of the alveoli in the pulmonary acinus. As the disease progresses, there is gradual loss of all components of the acinus until only a few strands of tissue, which are usually blood vessels, remain. PLE is usually diffuse, but is more severe in the lower lung areas. It is often found to some degree in older people, who do not have chronic bronchitis or clinical impairment of lung function. The term senile emphysema was formerly applied to this condition. PLE occurs as commonly in women and men, but is less frequent than CLE. It is a characteristic finding in those with homozygous deficiency of serum alpha-1 antitrypsin. It has also been found that certain populations of IV Ritalin abusers show PLE.

Bullae are common in both CLE and PLE, but may exist in the absence of either. Air-filled spaces in the visceral pleura are commonly termed blebs, and those in the parenchyma greater than 1 cm in diameter are called bullae. A valve mechanism in the bronchial communication of a bulla permits air trapping and enlargement of the air space. This scenario may compress the surrounding normal lung. Blebs may rupture into the pleural cavity causing a pneumothorax, and through a valve mechanism in the bronchopleural fistula a tension pneumothorax may develop.

Paracicatricial emphysema occurring adjacent to pulmonary scars represents another type of localized emphysema. When the air spaces distal to terminal bronchioles are increased beyond the normal size but do not show destructive changes of the alveolar walls, the condition is called pulmonary overinflation. This condition may be obstructive, because of air trapping beyond an incomplete bronchial obstruction due to a foreign body or a neoplasm. Many lung lobules may be simultaneously affected as a result of many check-valve obstructions, as in bronchial asthma. Pulmonary overinflation may also be nonobstructive, less properly called “compensatory emphysema”, when associated with atelectasis or resection of other areas of the lung.

Bronchiectasis means irreversible dilation and distortion of the bronchi and bronchioles. Saccular bronchiectasis is the classic advanced form characterized by irregular dilatations and narrowing. The term cystic is used when the dilatations are especially large and numerous. Cystic bronchiectasis can be further classified as fusiform or varicose.

Tubular bronchiectasis is simply the absence of normal bronchial tapering and is usually a manifestation of severe chronic bronchitis rather than of true bronchial wall destruction.

Repeated or prolonged episodes of pneumonitis, inhaled foreign objects or neoplasms have been known to cause bronchiectasis. When the bronchiectatic process involves most or all of the bronchial tree, whether in one or both lungs, it is believed to be genetic or developmental in origin.

Mucoviscidosis, Kartagener’s syndrome (bronchiectasis with dextrocardia and paranasal sinusitis), and agammaglobulinemia are all examples of inherited or developmental diseases associated with bronchiectasis. The term pseudobronchiectasis is applied to cylindrical bronchial widening, which may complicate a pneumonitis but which disappears after a few months. Bronchiectasis is true saccular bronchiectasis but without cough or expectoration. It is located especially in the upper lobes where good dependent drainage is available. A proximal form of bronchiectasis (with normal distal airways) complicates aspergillus mucus plugging.

Advanced bronchiectasis is often accompanied by anastomoses between the bronchial and pulmonary vessels. These cause right-to-left shunts, with resulting hypoxemia, pulmonary hypertension and cor pulmonale.

Keeping a healthy lung prevents emphysema.  So for starters don’t smoke and exercise; which includes don’t be exposed to smoke frequently!