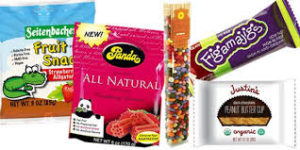 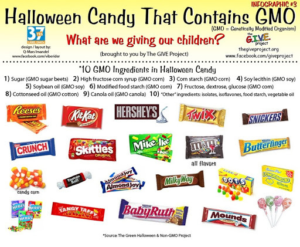 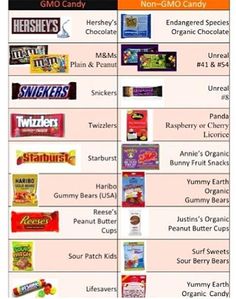 “While scientists do not know what exactly causes psoriasis, we do know that the immune system and genetics play major roles in its development.   Usually something triggers psoriasis to flare.  The skin cells in people with psoriasis grow at an abnormal fast rate, which causes the buildup of psoriasis lesions.”

“Spina bifida is a condition that affects the spine and is usually apparent at birth. It is a type of neural tube defect (NTD).” 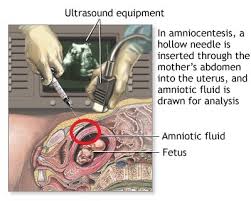 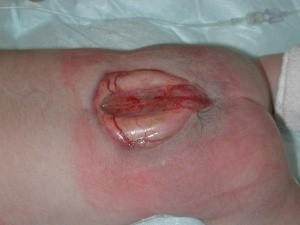 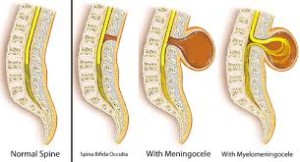 Spina Bifida is the most common permanently disabling birth defect in the United States.

Spina Bifida happens when a baby is in the womb and the spinal column does not close all of the way. Every day, about 8 babies born in the United States have Spina Bifida or a similar birth defect of the brain and spine.

No one knows for sure the exact cause of spina bifida but have their ideas. Scientists believe that genetic and environmental factors act together to cause the condition.

Although doctors and researchers don’t know for sure why spina bifida occurs, they have identified a few risk factors:

There are different types of Spina Bifida:

Occult Spinal Dysraphism (OSD) Infants with this have a dimple in their lower back. Because most babies with dimples do not have OSD, a doctor has to check using special tools and tests to be sure. Other signs are red marks, hyperpigmented patches on the back, tufts of hair or small lumps. In OSD, the spinal cord may not grow the right way and can cause serious problems as a child grows up. Infants who might have OSD should be seen by a doctor, who will recommend tests.

Myelomeningocele (Meningomyelocele), also called Spina Bifida Cystica This is the most severe form of Spina Bifida. It happens when parts of the spinal cord and nerves        come through the open part of the spine. It causes nerve damage and other disabilities.    70 to 90% of children with this condition also have too much fluid on their brains. This happens because fluid that protects the brain and spinal cord is unable to drain like it should. The fluid builds up, causing pressure and swelling. Without treatment, a person’s head grows too big, and may have brain damage. Children who do not have Spina Bifida can also have this problem, so parents need to check with a doctor. Usually, however, tissues and nerves are exposed, making the baby prone to life-threatening infections.

Neurological impairment is common, including:

The operation involves closing the opening in the spinal cord and covering the cord with muscles and skin taken from either side of the back. The most common complications are tethered spinal cord and hydrocephalus, which can have very severe consequences.

“The immediate cause of sudden cardiac arrest is usually an abnormality in your heart rhythm (arrhythmia), the result of a problem with your heart’s electrical system.” 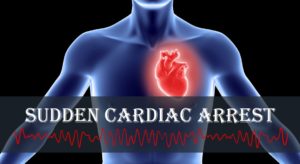 Cardiac arrest is the abrupt loss of heart function in a person who may or may not have diagnosed heart disease. The time and mode of death are unexpected. It occurs instantly or shortly after symptoms appear.

No. The term “heart attack” is often mistakenly used to describe cardiac arrest. While a heart attack may cause cardiac arrest and sudden death, the terms don’t mean the same thing. Heart attacks are caused by a blockage that stops blood flow to the heart. A heart attack (or myocardial infarction) refers to death of heart muscle tissue due to the loss of blood supply, not necessarily resulting in the death of the heart attack victim.

What is cardiac arrest? Sudden cardiac arrest occurs suddenly and often without warning. It is triggered by an electrical malfunction in the heart that causes an irregular heartbeat (arrhythmia). With its pumping action disrupted, the heart cannot pump blood to the brain, lungs and other organs. Seconds later, a person loses consciousness and has no pulse. Death occurs within minutes if the victim does not receive treatment. 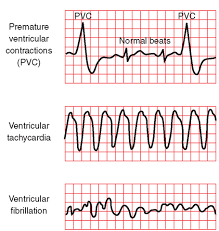 What to do: Heart Attack Even if you’re not sure it’s a heart attack, don’t wait more than five minutes to call 9-1-1 or your emergency response number. Every minute matters! It’s best to call EMS to get to the emergency room right away. Emergency medical services staff can begin treatment when they arrive — up to an hour sooner than if someone gets to the hospital by car. EMS staff are also trained to revive someone whose heart has stopped. Patients with chest pain who arrive by ambulance usually receive faster treatment at the hospital, too.

What to do: Sudden Cardiac Arrest Cardiac arrest is reversible in most victims if it’s treated within a few minutes. First, call 9-1-1 for emergency medical services. Then get an automated external defibrillator if one is available and use it as soon as it arrives. Begin CPR immediately and continue until professional emergency medical services arrive. If two people are available to help, one should begin CPR immediately while the other calls 9-1-1 and finds an AED.  Learn CPR  you may just save someone one day being at the right place at the right time.

Sudden cardiac arrest is a leading cause of death unfortunately – nearly 400,000 out-of-hospital cardiac arrests occur annually in the United States. By performing Hands-Only CPR to the beat of the classic disco song “Stayin’ Alive,” you can double or even triple a victim’s chance of survival. Learn the two easy steps to save a life at heart.org/handsonlycpr.

“Heart attacks can be deadly, and the widow maker is one of the deadliest kind.  You most likely won’t survive.” 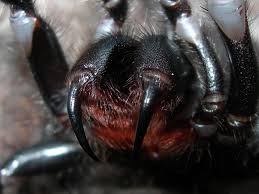 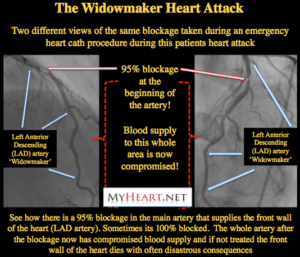 When it comes to the heart, time is critical. Blood carries oxygen to the body. When blood flow is blocked, cells can die. The more time that passes before treatment, the bigger the risk of death.

A complete blockage in the main artery that feeds the front and side walls of the heart and the septum, a muscular boundary between the left and right chambers.

“That’s a big deal” ,says Dr. Todd Caulfield, the Providence interventional cardiologist who operates on patient’s like this. “People call this the widow maker.”, he states.  Nationwide about 300,000 people suffer cardiac arrest outside a hospital every year, according to the federal Centers for Disease Control and Prevention. Only 8 percent survive.

The heart pumps blood to the body and brain. The heart also needs blood so it pumps blood to itself, too. The heart’s blood supply is essentially three main arteries: one that goes to the front; the other that goes to the back; and the final artery that connects to the side of the heart. When one of those arteries is blocked, the heart doesn’t get enough blood and oxygen, causing a heart attack. This is simply due to the block that doesn’t allow oxygen to the heart tissue that that artery feeds oxygenated blood.  This causes ischemia (lack of oxygen perfusion to tissue).  It causes pain first (chest pain=angina) and if the block continues than it will lead to infarction meaning death of the tissue not receiving enough (partial block) or no oxygen (a complete block).  The exact same thing happens in the brain, which causes a stroke; or the foot causing first pain leading to blackish skin of the foot tissue=necrotic tissue which ends up being amputated (like in some patients with  diabetes or peripheral vascular disease).  So lack of oxygen to our tissue parts anywhere can cause death to the tissue and depending on the tissue area cause death (like with the heart, due to the heart being the engine of the human body).

Interventional Cardiologist Randy Goodroe says patients are getting treatment quicker for heart attacks, more now than ever before. So the once grim reality of suffering from “the widowmaker” – a heart attack that results in immediate death – has become somewhat of a misnomer.

It’s called a “widowmaker”, Dr. Goodroe added, because it would typically kill you if the artery doesn’t get opened fast enough.

There are two different kinds of heart attacks. One is called an ST-elevation myocardial infarction, or STEMI, where the artery is totally blocked (i.e. the widowmaker), and we are on the clock to get the artery opened as soon as possible. There’s also a non-ST-elevation myocardial infarction (NSTEMI) where an artery is partially or temporarily blocked, and is still urgent to get the artery cleared, but not emergent.

Age is definitely a risk factor. We start seeing coronary disease in people who are between 50 and 60-years-old, and obviously, the older the person, the older the arteries, the higher the risk. Diabetes is another one of the greatest risk factors. Smoking is the strongest modifiable risk factor, meaning it’s the worst thing people can do to themselves to accelerate the disease process. High blood pressure and family history are also risk factors for heart attacks.

How to detect it if in the ER with symptoms & than repair it:

If a patient enters the ER with heart attack symptoms, quickly performed is an electrocardiogram (EKG) including cardiac enzymes to and echocardiogram or stress test to detect a totally obstructed artery. The artery is like a pipe or a tube., so we put a tiny wire through the blockageThose patients are very quickly taken to the cardiac catheterization lab where an angiogram is done to detect if there is and how bad the blockage is, if present.  Than with an angioplasty (balloons) at the end of the angiogram catheter break up the blockage and stents inserted in the area of blockage to get the blood flowing to the heart again.  The balloon is taken out and a stent is slid over that also has a balloon on it and once the stent goes up, it props open the blockage.  Blockage is repaired.