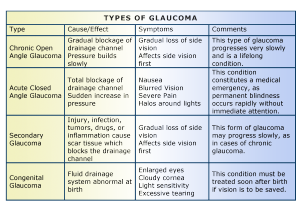 A common eye condition in which the fluid pressure inside the eye rises to a level higher than healthy for that eye. If untreated, it may damage the optic nerve, causing the loss of vision or even blindness. The elderly, African-Americans, and people with family histories of the disease are at greatest risk.

Glaucoma is a multi-factorial, complex eye disease with specific characteristics such as optic nerve damage and visual field loss. While increased pressure inside the eye (called intraocular pressure or IOP) is usually present, even patients with normal range IOP can develop glaucoma.

There is no specific level of elevated eye pressure that definitely leads to glaucoma; conversely, there is no lower level of IOP that will absolutely eliminate a person’s risk of developing glaucoma. That is why early diagnosis and treatment of glaucoma is the key to preventing vision loss.

High eye pressure alone does not cause glaucoma. However, it is a significant risk factor. Individuals diagnosed with high eye pressure should have regular comprehensive eye examinations by an eyecare professional to check for signs of the onset of glaucoma.

A person with elevated IOP is referred to as a glaucoma suspect, because of the concern that the elevated eye pressure might lead to glaucoma. The term glaucoma suspect is also used to describe those who have other findings that could potentially, now or in the future, indicate glaucoma. For example, a suspicious optic nerve, or even a strong family history of glaucoma, could put someone in the category of a glaucoma suspect.

Vision loss from glaucoma occurs when the eye pressure is too high for the specific individual and damages the optic nerve. Any resultant damage cannot be reversed. The peripheral (side) vision is usually affected first. The changes in vision may be so gradual that they are not noticed until a lot of vision loss has already occurred.

In time, if the glaucoma is not treated, central vision will also be decreased and then lost; this is how visual impairment from glaucoma is most often noticed. The good news is that glaucoma can be managed if detected early, and with medical and/or surgical treatment, most people with glaucoma will not lose their sight.

Most common signs and symptoms of Glaucoma:

There are several forms of glaucoma; the two most common forms are primary open-angle glaucoma (POAG) and angle-closure glaucoma (ACG). Open-angle glaucoma is often called “the sneak thief of sight” because it has no symptoms until significant vision loss has occurred.

Open-angle glaucoma, the most common form of glaucoma, accounting for at least 90% of all glaucoma cases:

“Open-angle” means that the angle where the iris meets the cornea is as wide and open as it should be. Open-angle glaucoma is also called primary or chronic glaucoma. It is the most common type of glaucoma, affecting about three million Americans.

There are typically no early warning signs or symptoms of open-angle glaucoma. It develops slowly and sometimes without noticeable sight loss for many years.

Most people who have open-angle glaucoma feel fine and do not notice a change in their vision at first because the initial loss of vision is of side or peripheral vision, and the visual acuity or sharpness of vision is maintained until late in the disease.

By the time a patient is aware of vision loss, the disease is usually quite advanced. Vision loss from glaucoma is not reversible with treatment, even with surgery.

Because open-angle glaucoma has few warning signs or symptoms before damage has occurred, it is important to see a doctor for regular eye examinations. If glaucoma is detected during an eye exam, your eye doctor can prescribe a preventative treatment to help protect your vision.

In open-angle glaucoma, the angle in your eye where the iris meets the cornea is as wide and open as it should be, but the eye’s drainage canals become clogged over time, causing an increase in internal eye pressure and subsequent damage to the optic nerve. It is the most common type of glaucoma, affecting about four million Americans, many of whom do not know they have the disease.

It is also called acute glaucoma or narrow-angle glaucoma. Unlike open-angle glaucoma, angle-closure glaucoma is a result of the angle between the iris and cornea closing.

Angle-closure glaucoma is caused by blocked drainage canals in the eye, resulting in a sudden rise in intraocular pressure. This is a much more rare form of glaucoma, which develops very quickly and demands immediate medical attention

In contrast with open-angle glaucoma, symptoms of acute angle-closure glaucoma are very noticeable and damage occurs quickly. If you experience any of these symptoms, seek immediate care from an ophthalmologist.

If you are diagnosed with glaucoma, it is important to set a regular schedule of examinations with your eye doctor to monitor your condition and make sure that your prescribed treatment is effectively maintaining a safe eye pressure.

Tomorrow stay tune for part II on glaucoma awareness giving other types of glaucoma, how its diagnosed & the risks.