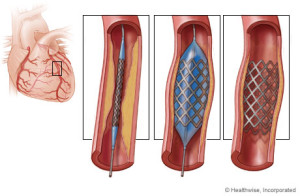 A stent is a wire mesh tube that is used to help hold open an artery. To simple understanding this concept think of a plumber or a mechanic. With a plumber sometimes they have to replace a certain area of a pipe that connects the water or like a mechanic replacing a certain area of piping (like the muffler piping connected infront of the muffler than can either can be replaced or just welded with piece of piping welded just to save money. Well a stent opens the artery that was clogged and its put in that place to reinforce that area of the artery to remain open to allow blood to get to that heart from that coronary artery and it will stay there life to keep the artery permanently patent to prevent the blockage from happening again with the synthetic mesh piece.

There are variety of stents currently available.

For a surgeon to find out if you even need one, first usually a angiogram is performed and this is a catheter simply from the femerol artery or from your arm to the coronary arteries. If the MD sees you show a blockage 80% or more an angioplasty is performed which is a balloon at the end of this catheter that blows up and decompresses to give the effect like punching gloves. The balloon inflates and deflates over and over again till the blockage breaks open free and then a stent is put in that area to help keep it open permanently (patent).

Some stents have been compressed onto the outside of an angioplasty balloon catheter and delivered by inflating the balloon in the desired location. Other stents are “self- expanding” spring-loaded devices, which expand automatically upon deployment.

Stents remain in arteries permanently. The tissue lining the arteries actually grows over the metal mesh to cover the inner lumen of the stent.

Stent procedures have become very common like tonsillectomies were in childhood. Stents are sometimes used as an alternative to coronary artery bypass surgery, if the patient is a candidate. Stents are often used in combination with balloon angioplasty. One leads to the other depending on what the angioplasty displays for the surgeon on the T.V. in when they are doing the procedure and if the come up to a blockage high enough to perform the angioplasty followed with a stent it will be done.

Stents allow angioplasty to be done in patients with severe and long-segment obstruction of coronary arteries. As soon as the I initial part of the block is widened, a stent is place, which holds it open allowing further opening to proceed. Stents have also allowed angioplasty to be performed in patients with blocks of multiple vessels, and in multiple blocks in a single artery.

Risks include the standard risks of an interventional, catheter-based procedure, which should be specifically discussed with your doctor. Lesions treated with stents can “restenosis” (re- narrow with in weeks to months after the procedure) similar to restenosis associated with angioplasty. This is why patients after having a stent put in they are on a medication for example like Plavix for life to prevent this occurrence from happening. It is a anti platelet medication, meaning it doesn’t allow clotting to happen in the stent so blockage doesn’t reoccur through clotting.

Many new technologies are being tested to reduce the problem of restenosis. These technologies include coating and coverings for the stent, new materials, and radiation. These new technologies are primarily experimental at this point and will reach soon to the market if not already. Technology allows the medical field to continuously expand and this will be replaced at one point but isn’t yet. Just give it time. At one point we had no CABG (coronary artery bypass) but now the stent in certain cases is replaced by angiograms to further expanding to angioplasties and stents furthering allowing the surgery to take place 1x hopefully if the patient is compliant in diet, exercise, and following the doctors orders with meds, activity and follow up visits (which are so vital).   A lot is up to the patient in caring or themselves to prevent having this take place again.

Your doctor will recommend blood thinning medications following your stent procedure. These agents are usually given for one month post procedure along with aspirin and then continued indefinitely. Your doctor may also prescribe antibiotics for a period of time after the stent procedure, to be taken anytime you have a medical or dental procedure. Preventing infection.

MRI tests should not be done for at least eight weeks without your doctor’s approval. Metal detectors do not present a problem. Stents appear to be safe in the long-term; there are no long-term complications associated with a permanent stent.