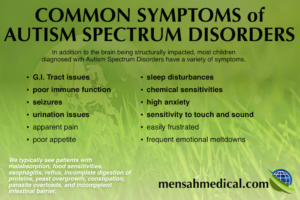 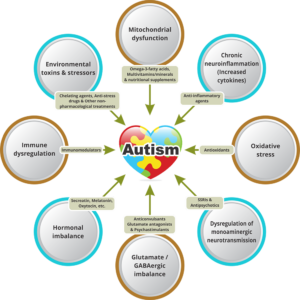 Williams Syndrome (also known as Williams-Beuren syndrome) is a rare genetics disorder in which a portion of DNA material on chromosome 7 is missing. The prevalence in the population is somewhere between 1 out of 10,000.

However, Williams Syndrome includes other symptoms that may require different or additional treatments. A diagnosis is essential to maximize quality of care.

Fragile X syndrome (also known as Martin-Bell syndrome) is a sex-linked genetic disorder. The exact frequency of Fragile X syndrome is unclear, but the CDC estimates that roughly 1.4 in 10,000 males and 0.9 in 10,000 females are affected by this disorder. Males afflicted with this syndrome typically have a moderate to severe form of intellectual handicap. Females may also be affected but generally have a mild form of impairment.

People with Fragile X syndrome also have a number of recognizable physical features, including a high arched palate, strabismus (lazy eye), large ears, long face, large testicles in males, poor muscle tone, flat feet, and sometimes mild, heart valve abnormalities. Although most individuals with Fragile X syndrome have a characteristic ‘look’ (long face and large ears), there are some who do not have typical features.

Many hospitals and laboratories perform blood tests to diagnose Fragile X syndrome. Several treatments are recommended for individuals with this disorder, including mild medications for behavior problems and therapies for speech and language and sensory improvement. Families are advised to seek genetic counseling to understand the inheritable nature of Fragile X Syndrome and to discuss with family members the likelihood other individuals or future offspring may have this disorder.

Thank  You to Dr. Peter Jacky of Kaiser Sunnyside Hospital in Clackamas, Oregon for his comments on this article.

Landau-Kleffner Syndrome is a rare form of epilepsy that manifests as a form of aphasia, (loss of language), which usually develops between 3 and 7 years. It is twice as common in males than females and is often diagnosed in conjunction with autism. Initially, these individuals have a healthy, problem-free development with normal speech and vocabulary. These individuals first lose their ability to comprehend (i.e., receptive speech) and then their ability to speak (i.e., expressive speech). These changes can occur gradually or suddenly.

People with Landau-Kleffner Syndrome have abnormal EEG patterns (i.e., brain waves) in the temporal lobe (located on the sides of the brain) and in the temporo-parieto-occipital regions during sleep. Diagnosis of this syndrome usually involves examining the person’s EEG patterns during sleep. Approximately 70% develop epilepsy; and these seizures are typically infrequent and can be either with or without convulsions.

The cause of Landau-Kleffner Syndrome is not known. Some suggested causes have been a dysfunctional immune system, exposure to a virus, and brain trauma. The prognosis is better when the onset is after age 6 and when speech therapy is started early. Several other treatments have also been shown to be beneficial for many of these individuals, such as anticonvulsant mediations and corticosteroids. There is also a surgical technique in which the pathways of abnormal electrical brain activity are severed.

Some of the behaviors which are common to both Prader-Willi Syndrome and autism are:

The most effective form of treatment for people suffering from Prader-Willi Syndrome is behavior modification. In general, medications do not appear to be very effective for these individuals.

Angelman syndrome is a genetic disorder that affects the nervous system. Initial symptoms of this disorder typically manifest in the first year of life and become more apparent through early childhood. It is estimated that Angelman syndrome occurs in roughly every one in 15,000 people. Similarly to Prader Willi Syndrome, this disorder derives from a missing portion of chromosome 15, but unlike Prader Willi, this deficit comes from the maternal side.

Angelman syndrome is commonly characterized by:

Rett Syndrome was first recognized by Andreas Rett in 1966 and is a neurological disorder affecting primarily females. Autopsies on the brains of these individuals indicate a pathology different from autism; however, children afflicted with Rett Syndrome often exhibit autistic-like behaviors, such as repetitive hand movements, prolonged toe walking, body rocking, and sleep problems. In most cases, there is a regression in cognition, behavior, social, and motor skills throughout their lifetime.

In 1999, Dr. Huda Zoghbi and her colleagues located the gene for Rett syndrome. The gene was located on one of the two X chromosomes that determine sex. Rett syndrome results from the mutation of the gene that makes methyl cytosine binding protein, resulting in excessive amounts of this protein.

Tardive dyskinesia is a syndrome involving dysfunctional, involuntary movements associated with long-term, chronic use of neuroleptic medications, such as Haldol, Prolixin, and Thorazine. These drugs lead to an apparent general calming or sedative effect on the individual and are considered major tranquilizers.

Tardive dyskinesia may appear anywhere from three months to several years after initial use of these medications, and withdrawal from neuroleptics often exacerbates the symptoms.

Common tardive dyskinesia movements include, but are not limited to:

Tardive dyskinesia may lead to very serious problems, such as respiratory interference, inability to eat, oral ulcerations, and difficulty standing/walking.

Tardive dyskinesia movements may be confused with stereotypy because of the repetitive nature of both behaviors. Stereotypy refers to ritualistic, often complex behaviors, such as body and head rocking, hand-flapping, and complex hand movement patterns. Stereotypy appears to be under voluntary control. In contrast, tardive dyskinesia movements are less complex, less ritualistic, and are not volitional.

Other psychoactive drugs, such as clozaril/clozapine, have similar effects on behavior but do not produce tardive dyskinesia as neuroleptics do.

While the behavioral symptoms of the conditions above may overlap with autism, they may require different or additional treatments. Seek a diagnosis and treatment plan from a qualified medical professional before starting any form of treatment.