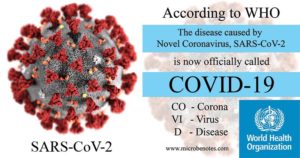 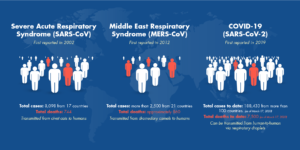 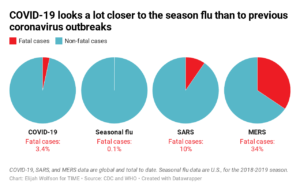 The virus identified in 2003. SARS-CoV is thought to be an animal virus from an as-yet-uncertain animal reservoir, perhaps bats, that spread to other animals (civet cats) and first infected humans in the Guangdong province of southern China in 2002.

An epidemic of SARS affected 26 countries and resulted in more than 8000 cases in 2003. Since then, a small number of cases have occurred as a result of laboratory accidents or, possibly, through animal-to-human transmission (Guangdong, China).

Transmission of SARS-CoV is primarily from person to person. It appears to have occurred mainly during the second week of illness, which corresponds to the peak of virus excretion in respiratory secretions and stool, and when cases with severe disease start to deteriorate clinically. Most cases of human-to-human transmission occurred in the health care setting, in the absence of adequate infection control precautions. Implementation of appropriate infection control practices brought the global outbreak to an end.

Nature of the disease

Symptoms are influenza-like and include fever, malaise, myalgia, headache, diarrhoea, and shivering (rigors). No individual symptom or cluster of symptoms has proved to be specific for a diagnosis of SARS. Although fever is the most frequently reported symptom, it is sometimes absent on initial measurement, especially in elderly and immunosuppressed patients.

The distribution is based on the 2002–2003 epidemic. The disease appeared in November 2002 in the Guangdong province of southern China. This area is considered as a potential zone of re-emergence of SARS-CoV.

Other countries/areas in which chains of human-to-human transmission occurred after early importation of cases were Toronto in Canada, Hong Kong Special Administrative Region of China, Chinese Taipei, Singapore, and Hanoi in Viet Nam.

Currently, no areas of the world are reporting transmission of SARS. Since the end of the global epidemic in July 2003, SARS has reappeared four times – three times from laboratory accidents (Singapore and Chinese Taipei), and once in southern China where the source of infection remains undetermined although there is circumstantial evidence of animal-to-human transmission.

Should SARS re-emerge in epidemic form, WHO will provide guidance on the risk of travel to affected areas. Travellers should stay informed about current travel recommendations. However, even during the height of the 2003 epidemic, the overall risk of SARS-CoV transmission to travellers was low.

None. Experimental vaccines are under development.

The virus that causes coronavirus disease 2019 (COVID-19) is stable for several hours to days in aerosols and on surfaces, according to a new study from National Institutes of Health, CDC, UCLA and Princeton University scientists in The New England Journal of Medicine. The scientists found that severe acute respiratory syndrome coronavirus 2 (SARS-CoV-2) was detectable in aerosols for up to three hours, up to four hours on copper, up to 24 hours on cardboard and up to two to three days on plastic and stainless steel. The results provide key information about the stability of SARS-CoV-2, which causes COVID-19 disease, and suggests that people may acquire the virus through the air and after touching contaminated objects. The study information was widely shared during the past two weeks after the researchers placed the contents on a preprint server to quickly share their data with colleagues.

The NIH scientists, from the National Institute of Allergy and Infectious Diseases’ Montana facility at Rocky Mountain Laboratories, compared how the environment affects SARS-CoV-2 and SARS-CoV-1, which causes SARS. SARS-CoV-1, like its successor now circulating across the globe, emerged from China and infected more than 8,000 people in 2002 and 2003. SARS-CoV-1 was eradicated by intensive contact tracing and case isolation measures and no cases have been detected since 2004. SARS-CoV-1 is the human coronavirus most closely related to SARS-CoV-2. In the stability study the two viruses behaved similarly, which unfortunately fails to explain why COVID-19 has become a much larger outbreak.

The NIH study attempted to mimic virus being deposited from an infected person onto everyday surfaces in a household or hospital setting, such as through coughing or touching objects. The scientists then investigated how long the virus remained infectious on these surfaces.

The scientists highlighted additional observations from their study:

The findings affirm the guidance from public health professionals to use precautions similar to those for influenza and other respiratory viruses to prevent the spread of SARS-CoV-2: