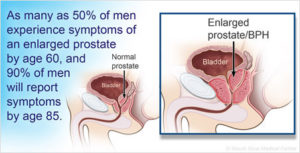 What is benign prostatic hyperplasia?

The prostate goes through two main growth periods as a man ages. The first occurs early in puberty, when the prostate doubles in size. The second phase of growth begins around age 25 and continues during most of a man’s life. Benign prostatic hyperplasia often occurs with the second growth phase.

Ending line the prostate enlarges pushes up to the superior both front and back aspects of the penis (just below the urinary bladder) narrowing the urethra in the penis shaft (on both sides of the urethra) causing urination difficulty and frequently urinating.  (See figure below  the picture shows in the top part the urinary bladder and the prostate below it Left normal Right BPH).

Throughout their lives, men produce testosterone, a male hormone, and small amounts of estrogen, a female hormone. As men age, the amount of active testosterone in their blood decreases, which leaves a higher proportion of estrogen. Scientific studies have suggested that benign prostatic hyperplasia may occur because the higher proportion of estrogen within the prostate increases the activity of substances that promote prostate cell growth.

Another theory focuses on dihydrotestosterone (DHT), a male hormone that plays a role in prostate development and growth. Some research has indicated that even with a drop in blood testosterone levels, older men continue to produce and accumulate high levels of DHT in the prostate. This accumulation of DHT may encourage prostate cells to continue to grow. Scientists have noted that men who do not produce DHT do not develop benign prostatic hyperplasia.

How common is BPH?

BPH, the prostate gland grows in size. It may compress the urethra which courses through the center of the prostate. This can impede the flow of urine from the bladder through the urethra to the outside. It can cause urine to back up in the bladder (retention) leading to the need to urinate frequently during the day and night. Other common symptoms include a slow flow of urine, the need to urinate urgently and difficulty starting the urinary stream. More serious problems include urinary tract infections=pain in pelvic region and complete blockage of the urethra, which would be a medical emergency and can lead injury to the kidneys.

No. Treatment of BPH is usually reserved for men with significant symptoms. Watchful waiting with medical monitoring once a year is appropriate for most men with BPH.

How is BPH treated?

There are several different ways to treat BPH:

Men should carefully weigh the risks and benefits of each of these options. Prostate surgery has traditionally been seen as offering the most benefits for BPH but unfortunately carries the most risks.

Medical Treatment through drugs is used by some men rangaing from alpha blockers relax the smooth muscles of the prostate, and the bladder neck.  An example of these meds are tamsulosin (Flomax), alfuzosin (Uroxatral), and older medications such as terazosin (Hytrin), slidosin (Rapaflo) or doxazosin (Cardura).

Also 5-alpha reductase inhibitors block the conversion of the male hormone testosterone into its active form in the prostate.  Examples of 5-alpha reductase inhibitors include Finasteride (Proscar) and dutasteride (Avodart). Side effects of finasteride may include declining interest in sex, problems getting an erection, and problems with ejaculation.

Surgery or office procedures may also be used to treat BPH, most commonly in men who have not responded satisfactorily to medication or those who have more severe problems, such as a complete inability to urinate.