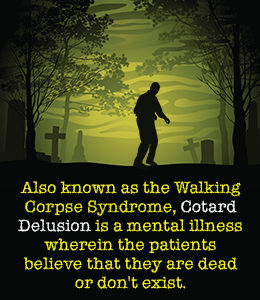 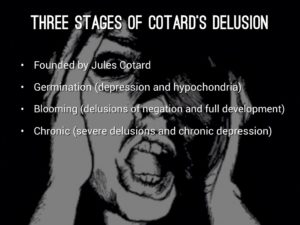 Cotard delusion, also known as or nihilistic delusion or walking corpse syndrome or Cotard’s syndrome , is a rare mental disorder in which the affected person holds the delusional belief that they are already dead, do not exist, are putrefying, or have lost their blood or internal organs.

While some people feel this way about their entire body, others only feel it in regard to specific organs, limbs, or even their soul.

Depression is also closely related to Cotard delusion. A 2011 review of existing research about Cotard delusion notes that 89% of documented cases include depression as a symptom.

In addition, Cotard delusion seems to occur more often in people who think their personal characteristics, rather than their environment, cause their behavior. People who believe that their environment causes their behavior are more likely to have a related condition called Capgras syndrome. This syndrome causes people to think their family and friends have been replaced by imposters. Cotard delusion and Capgras syndrome can also appear together.

Other mental health conditions that might increase someone’s risk of developing Cotard delusion include:

Cotard delusion also seems to be associated with certain neurological conditions, including:

Diagnosing Cotard delusion is often difficult because most organizations don’t recognize it as a disease. This means there’s no standardized list of criteria used to make a diagnosis. In most cases, it’s only diagnosed after other possible conditions have been ruled out.

If you think you might have Cotard delusion, try to keep a journal of your symptoms, noting when they occur and how long they last. This information can help your doctor narrow down the possible causes, including Cotard delusion. Keep in mind that Cotard delusion usually occurs alongside other mental illnesses, so you might receive more than one diagnosis.

Treatment for the disease:

Cotard delusion usually occurs with other conditions, so treatment options can vary widely. However, a 2009 review found that electroconvulsive therapy (ECT) was the most commonly used treatment. It’s also a common treatment for severe depression. ECT involves passing small electric currents through your brain to create small seizures while you’re under general anesthesia.

However, ECT does carry some potential risks, including memory loss, confusion, nausea, and muscle aches. This is partly why it’s usually only considered after other trying other treatment options, including: