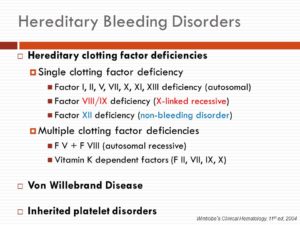 Bleeding disorders are a group of conditions that result when the blood cannot clot properly. In normal clotting, platelets, a type of blood cell, stick together and form a plug at the site of an injured blood vessel. Proteins in the blood called clotting factors then interact to form a fibrin clot, essentially a gel plug, which holds the platelets in place and allows healing to occur at the site of the injury while preventing blood from escaping the blood vessel. While too much clotting can lead to conditions such as heart attacks and strokes, the inability to form clots can be very dangerous as well, as it can result in excessive bleeding. Bleeding can result from either too few or abnormal platelets, abnormal or low amounts of clotting proteins, or abnormal blood vessels.

Hemophilia is perhaps the most well-known inherited bleeding disorder, although it is relatively rare. It affects mostly males.

How do you know if your at risk?

What is Hemophilia and how is it treated?

Hemophilia is a rare, inherited bleeding disorder that can range from mild to severe, depending on how much clotting factor is present in the blood. Hemophilia is classified as type A or type B, based on which type of clotting factor is lacking (factor VIII in type A and factor IX in type B). Hemophilia results from a genetic defect found on the X chromosome. Women have two X chromosomes. Women who have one X chromosome with the defective gene are termed carriers and they can pass the disease onto their sons. Due to random chromosome activation, some women carriers may range from asymptomatic to symptomatic depending on how much of their factor VIII or IX is inactivated. In fact, some women may have “mild hemophilia,” though this is less common. Men have one X and one Y chromosome, so if their X chromosome has the defective gene, they will have hemophilia.

Because blood does not clot properly without enough clotting factor, any cut or injury carries the risk of excessive bleeding. In addition, people with hemophilia may suffer from internal bleeding that can damage joints, organs, and tissues over time.

In the past, people with hemophilia were treated with transfusions of factor VIII obtained from donor blood, but by the early 1980s these products were discovered to be transmitting blood-borne viruses, including hepatitis and HIV. Thanks to improved screening techniques, and a major breakthrough that enabled scientists to create synthetic blood factors in the laboratory by cloning the genes responsible for specific clotting factors, today’s factor-replacement therapies are pure and much safer than ever before.

What Is von Willebrand Disease and How Is It Treated?

With early diagnosis, people with von Willebrand disease can lead normal, active lives. People with mild cases may not require treatment, but should avoid taking drugs that could aggravate bleeding, such as aspirin and ibuprofen, without first consulting with a doctor. More serious cases may be treated with drugs that increase the level of von Willebrand factor in the blood or with infusions of blood factor concentrates. It is important for people with von Willebrand disease to consult with their doctors before having surgery, having dental work, or giving birth, so that proper precautions can be taken to prevent excessive bleeding. You may be referred to a hematologist, a doctor who specializes in the treatment of blood disorders.