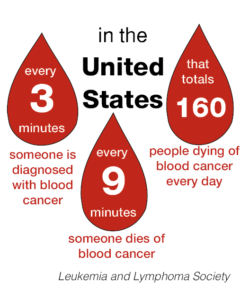 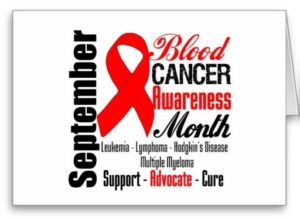 The six most common cancers—breast, lung, prostate, colorectal, melanoma and bladder—are solid cancers that account for almost 1 million new cases a year. Cancers that are not considered solid cancers are often lumped together in the category of blood cancers being:

The three main types of blood cancers are:

Multiple myeloma: This cancer develops in the bone marrow and affects plasma cells, which produce antibodies that attack infections and diseases. When plasma cells become cancerous, they may accumulate in the marrow and damage or weaken bone and cause pain. Cancerous plasma cells also produce faulty antibodies, which make it hard for the body to fight infections. multiple myeloma may be treated with targeted therapy, radiation therapy, chemotherapy and/or a stem cell transplant.

Leukemia: This cancer of the blood cells usually starts in bone marrow and travels through the bloodstream. In leukemia, the bone marrow produces mutated cells and spreads them into the blood, where they grow and crowd out healthy blood cells. Leukemia comes in many forms, but the key diagnosis is determined by whether the disease is acute or chronic. Acute leukemias are fast-growing and may require aggressive treatments.

Lymphomas: These diseases affect the cells in the lymphatic system. In lymphomas, immune cells called lymphocytes grow out of control and collect in lymph nodes, the spleen, in other lymph tissues or in neighboring organs. There are dozens of types of lymphoma, but the disease is largely categorized as Hodgkin lymphoma or non-Hodgkin lymphoma. Immunotherapy may be used to treat some cases of Hodgkin lymphoma. Other lymphoma treatments include chemotherapy and surgery to remove affected lymph nodes.

What purpose do these fluids have?

Patients with blood cancers often have symptoms common to all three forms of the disease: weakness and fatigue, bone pain, infections, fevers and weight loss. And some leukemias and lymphomas are so similar, they may be considered the same disease, but are named depending on whether they are found in the blood or in the lymph system. For instance, chronic lymphocytic leukemia and small lymphocytic lymphoma affect the same kind of cells—small lymphocytes—and are often considered different versions of the same disease. A definitive diagnosis may require a bone marrow biopsy or a procedure called flow cytometry, in which cancerous cells are analyzed with a laser.