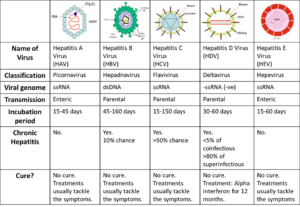 Hepatitis C is an infectious disease affecting primarily the liver, caused by the hepatitis C virus (HCV). The infection is often asymptomatic, but chronic infection can lead to scarring of the liver and ultimately to cirrhosis, which is generally apparent after many years. In some cases, those with cirrhosis will go on to develop liver failure, liver cancer, or life-threatening esophageal and gastric varices.

HCV is spread primarily by blood-to-blood contact associated with intravenous drug use, poorly sterilized medical equipment, and transfusions. An estimated 150–200 million people worldwide are infected with hepatitis C. The existence of hepatitis C – originally identifiable only as a type of non-A non-B hepatitis – was suggested in the 1970s and proven in 1989.  Hepatitis C infects only humans and chimpanzees. It is one of five known hepatitis viruses: A, B, C, D, and E.

The virus persists in the liver in about 85% of those infected. This infection of the liver is caused by the hepatitis virus. About 3.2 million people in the U.S. have the disease. But it causes few symptoms, so most of them don’t know.

There are many forms of the hepatitis C virus. The most common in the U.S. is type 1. None is more serious than any other, but they respond differently to treatment.

Jaundice (a condition that causes yellow eyes and skin, as well as dark urine), Stomach pain, Loss of appetite, Nausea, and Fatigue.

The virus spreads through the blood or body fluids of an infected person.

You can catch it from:

-Having sex, especially if you have an STD, an HIV infection, several partners, or have rough sex.

-Being stuck by infected needles

-Birth — a mother can pass it to a child

You can get a blood test to see if you have the hepatitis C virus.

Are There Any Long-Term Effects?

Yes. About 75% to 85% of people who have it develop a long-term infection called chronic hepatitis C. It can lead to conditions like liver cancer and cirrhosis, or scarring of the liver. This is one of the top reasons people get liver transplants.

Hepatitis C treatments have changed a lot in recent years. The latest is a once-daily pill called Harvoni that cures the disease in most people in 8-12 weeks. It combines two drugs: sofosbuvir (Sovaldi) and ledipasvir. In clinical trials, the most common side effects were fatigue and headache. However, the medicine is expensive.  Interferon and ribavirin used to be the main treatments for hepatitis C. They can have side effects like fatigue, flu-like symptoms, anemia, skin rash, mild anxiety, depression,nausea, and diarrhea.

THOSE AT HIGHEST RISK:

Certain things may increase your risk of becoming infected with the hepatitis C virus. Just because you are at risk for getting hepatitis C does not mean that you have the virus.

Many people do not know how they became infected with hepatitis C.

When you have hepatitis C, being tired — really tired — can be a fact of life. But there are ways you can boost your energy. Here, three people who have experience with fatigue from the disease share their tips.

You can get hepatitis from:

–Sharing needles and other equipment (such as cotton, spoons, and water) used to inject drugs.

-Having your ears or another body part pierced, getting a tattoo, or having acupuncture with needles that have not been sterilized properly. The risk of getting hepatitis C in these ways is very low.

-Working in a health care environment where you are exposed to fresh blood or where you may be pricked with a used needle. Following standard precautions for health care workers makes this risk very low.

Hepatitis D (hepatitis delta) is a disease caused by the hepatitis D virus (HDV), a small circular enveloped RNA virus. This is one of five known hepatitis viruses: A, B, C, D, and E. HDV is considered to be a sub-viral satellite because it can propagate only in the presence of the hepatitis B virus (HBV).

Transmission of HDV:  Most already are with Hepatitis B.  How can it transmit from one to another?  Well similar to that of Hepatitis B including:

Spread through infected Hepatitis B or D needles shared since one of the users blood is infected with the infection.

****both spreads infected through the blood and fluids in the body****

Spread through a infected mother to her newborn.

Remember it can occur either via simultaneous infection with HBV (coinfection) or superimposed on chronic hepatitis B or hepatitis B carrier state (superinfection).

Both superinfection and coinfection with HDV results in more severe complications compared to infection with HBV alone. These complications include a greater likelihood of experiencing liver failure in acute infections and a rapid progression to liver cirrhosis, with an increased chance of developing liver cancer in chronic infections. In combination with hepatitis B virus, hepatitis D has the highest fatality rate of all the hepatitis infections, at 20%.

The routes of transmission of hepatitis D are similar to those for hepatitis B. Infection is largely restricted to persons at high risk of hepatitis B infection, particularly injecting drug users and persons receiving clotting, and is mostly associated with intravenous drug use. factor concentrates. Worldwide more than 15 million people are co-infected. HDV is rare in most developed countries

The vaccine for hepatitis B protects against hepatitis D virus because of the latter’s dependence on the presence of hepatitis B virus for it to replicate.

Low quality evidence suggests that interferon alpha can be effective in reducing the severity of the infection and the effect of the disease during the time the drug is given, but the benefit generally stops when the drug is discontinued, indicating that it does not cure the disease. Interferon is effective only in ~20% of cases.

The drug myrcludex B, which inhibits virus entry into hepatocytes, is in clinical trials as of October 2015

Hepatitis E is a common cause of hepatitis outbreaks in developing parts of the world and is increasingly recognized as an important cause of disease in developed countries. Safe and effective vaccines to prevent HEV infection have been developed but are not widely available.  There is no FDA approved vaccination for Hepatitis E.