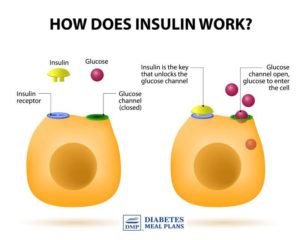 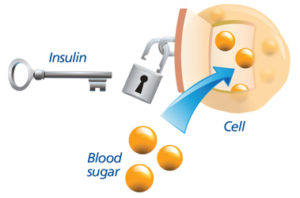 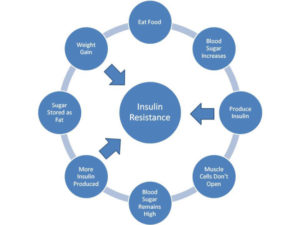 Insulin is a hormone made by the pancreas that allows your body to use sugar (glucose) from carbohydrates in the food that you eat for energy or to store glucose for future use. Insulin helps keeps your blood sugar level from getting too high (hyperglycemia) or too low (hypoglycemia).  How it works; when the glucose gets in your body after digestion starting from eating or even if your not eating by mouth but through IV with Dextrose in it (a form of sugar) or just on a feeding tube via a nasogastric tube or gastric tube (PEG) with Dextrose or some form of sugar in it will put glucose in your blood.  When you eat or drink, much of your food is broken down into a simple sugar called “glucose.”   All 3 routes of getting nutrition can cause your glucose count in the bloodstream to go up, if some form of sugar is in the nutrition supply you get in your body for the cells in our bloodstream.  Now glucose is food to our cells but the food has to get into the cells.  For glucose to pass into our cells it needs a hormone to allow the glucose to pass in the cell to be the food for the cell.  This is where Insulin comes into play!  Insulin is released by the pancrease and put in our bloodstream to do one of its MAIN functions to allow glucose in the cell.  For without insulin what happens is the glucose just will pile up outside of the blood cells and in time cause what we call Diabetes.  Without glucose going into our cells through insulin allowing it to pass in the cells we would not have energy that helps us in doing our activities of daily living.

So in review, the amount of glucose in your bloodstream is tightly regulated by the hormone insulin. Insulin is always being released in small amounts by the pancreas but especially after eating and when digestion takes place releasing the broken down sugar to “glucose” being released into our blood. When the amount of glucose in your blood rises to a certain level, the pancreas will release more insulin to push more glucose into the cells.

Diabetes mellitus (sometimes called “sugar diabetes“) is a condition that occurs when the body can’t use glucose (a type of sugar) normally. Glucose is the main source of energy for the body’s cells. The levels of glucose in the blood are controlled by a hormone called insulin, which is made by the pancreas that it releases into the blood- stream when glucose level goes up allowing for it to be utilized by our body in allowing the glucose to transfer over the cell membranes into the cells as the main source of energy-a major form of nutrition for out cells to do its functions especially transfer oxygen throughout the body to keep our tissues healthy and alive.  Without oxygen we would have tissue and cell starvation.  Think in a diabetic when blood flow gets thick due to high glucose levels in the bloodstream making it difficult for the blood to move throughout our body to oxygenate our tissues the first place the body compensates to allow oxygenated blood by our cells to get to our vital organs like heart, lungs, brain and not areas far away from the body like feet.  That is why you commonly hear of amputations of lower legs with uncontrolled or badly controlled diabetics (arms amputated is very, very rare due to diabetes, more its due to trauma.

People with diabetes either don’t make insulin or their body’s cells are resistant to insulin, leading to high levels of sugar circulating in the blood, called simply high blood sugar. By definition, diabetes is having a blood glucose level of 126 milligrams per deciliter (mg/dL) or more after an overnight fast (not eating anything).

So ending line without Insulin no glucose, a energy nutrition for our cells. we would not get glucose inside the cells. This as a ending result would cause cellular starvation of energy resulting into death in time (much sooner than other people without this problem) unless they take their insulin!

Another function of insulin is after our body uses all the glucose it needs at that time it needs to be stored somewhere.  Insulin helps control blood glucose levels by signaling the liver and muscle and fat cells to take in glucose from the blood.  To get the glucose level in therapeutic range for the body in time.

The 2 major groups of Diabetes occurs if someone has a problem with this role function of insulin resulting in one of the following:

Type 1 Diabetes occurs because the insulin-producing cells of the pancreas (called beta cells) are destroyed by the immune system. People with type 1 diabetes produce no insulin and must use insulin injections to control their blood sugar.  This is most commonly seen in people under age 20 but may occur at any age.

Type 2 Diabetes is the most common form of diabetes, affecting almost 18 million Americans. While most of these cases can be prevented, it remains for adults the leading cause of diabetes-related complications such as blindness, non-traumatic amputations, and chronic kidney failure requiring dialysis. Type 2 diabetes usually occurs in people over age 40 who are overweight, but can occur in people who are not overweight as well.Sometimes referred to as “adult-onset diabetes,” type 2 diabetes has started to appear more often in children because of the rise in obesity in young people.

Sometimes referred to as “adult-onset diabetes,” type 2 diabetes has started to appear more often in children because of the rise in obesity in young people.

Some people can manage their type 2 diabetes by controlling their weight, watching their diet, and exercising regularly. Others may also need to take a pill that helps their body use insulin better, or take insulin injections.

Often, doctors are able to detect the likelihood of type 2 diabetes before the condition actually occurs. Commonly referred to as pre-diabetes, this condition occurs when a person’s blood sugar levels are higher than normal, but not high enough for a diagnosis of type 2 diabetes.

Know this diabetes can be hereditary as well.

Maybe you might want to get your glucose checked by your M.D. and make sure your insulin is functioning well for the side effects of uncontrolled diabetes are detrimental and could shorten your life!