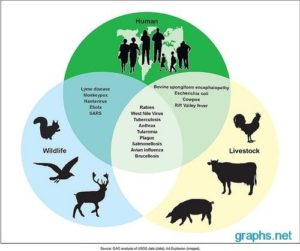 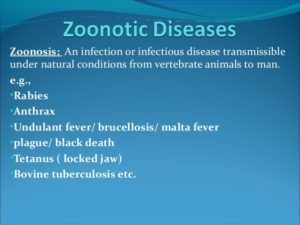 A further 33 diseases have featured in the World Health Organization’s Disease Outbreak News since its inception in 1996. Of the “big eight”now, six are known zoonotic diseases (diseases from animals) – and the remaining two hepatitis C and Chikungunya are assumed to be so, although the animal reservoir remains undiscovered. Whatever the explanation, hepatitis C (1989), West Nile virus (1999), SARS (2003), Chikungunya (2005), swine flu (2009), MERS (2012), Ebola (2014) and Zika (2015) have all since had their time in the media spotlight.

Since then, emerging diseases have been appearing at an accelerating rate. Part of the explanation for this may simply be that we are much better at detecting them now. On the other hand, population pressure, climate change and ecological degradation may be contributing to a situation where zoonosis – the movement of a disease from a vertebrate animal to a human host – is more common.

A zoonosis (zoonotic disease or zoonoses -plural) is an infectious disease that is transmitted between species from animals to humans (or from humans to animals).

1-Rabies Rabies is a disease that affects the nervous system of mammals. It is caused by a virus and is typically spread by an infected animal biting another animal or person. Rabies is a fatal disease; it cannot be treated once symptoms appear. Luckily, rabies can be effectively prevented by vaccination.

2-Blastomycosis (Blastomyces dermatitidis)  Blastomycosis is a rare fungal infection usually acquired by inhaling the spores of a fungus (Blastomyces dermatitidis) that can be found in wood and soil.  Blastomycosis occurs most often in people living in Ontario, Manitoba, and the south-central, south-eastern, and mid-western United States. In Minnesota, blastomycosis is most common in St. Louis, Itasca, Cass, Beltrami, Washington, and Chisago counties.   The time between exposure to the spores and when symptoms develop varies widely, ranging from 21 to 100 days. The signs and symptoms of blastomycosis vary among individuals. About 50% of infections are asymptomatic (person does not develop any symptoms or disease) or are mild and resolve without treatment.  Some patients develop a chronic lung infection or the disease can spread to other areas of the body (skin, bones, genitourinary system, or central nervous system).

C. psittaci infection can be transmitted from infected birds to humans. The disease resulting from C. psittaci infection in humans is called psittacosis (also known as parrot disease, parrot fever, and chlamydiosis). Most infections are typically acquired from exposure to pet psittacine (parrots, macaws, parakeets) birds.

Infection with C. psittaci usually occurs when a person inhales organisms that have been aerosolized from dried feces or respiratory tract secretions of infected birds. Other means of exposure include mouth-to-beak contact and handling infected birds’ plumage and tissues.

Psittacosis can result in serious health problems including fatal pneumonia. Diagnosis of psittacosis can be difficult. Antibiotic treatment is recommended.

4-Trichinosis (Trichinella spiralis) People can become infected with Trichinosis from eating raw or undercooked meat that contains the roundworm larvae. It is most commonly found in wild game meat (such as bear, wild feline, fox, dog, wolf, horse, seal, and walrus) and less commonly, pork. After the meat with the parasite larvae is eaten, the larvae grow into worms in the intestines, which reproduce and make larvae that go into the bloodstream and travel to the skeletal muscle and embed.A few days after eating the roundworm larvae they mature and begin reproducing; during this time symptoms can include nausea, vomiting, diarrhea, fever, fatigue, and abdominal pain. As the larvae go into the bloodstream and embed in the muscle; symptoms can include headaches, fevers, chills, weakness, cough, muscle pain, achy joints, pain/swelling around the face and eyes, light sensitivity, pink eye, itchy skin, extreme thirst, and sometimes incoordination and heart/lung problems. Symptoms can last a few months, to many months in severe cases. The severity depends on how many larvae were ingested.

What is the treatment for Trichinosis?

A mild case may not be noticed. Trichinosis is treated with anti-parasitic drugs, and can be fatal if severe cases are not treated. There is no treatment once the larvae embed in the muscles, pain relievers can help.

Generally people who get CSD are bitten, scratched, or licked by a cat before they get sick.  Fleas are responsible for transmitting B. henselae between cats.  Because kittens are more likely to be infected than adult cats, they are more likely to transmit cat scratch disease to humans.  Cats are the natural reservoir for the bacteria that causes CSD, and generally do not show any signs of illness. Therefore it is impossible to know which cats can spread CSD to you.  It is believed that transmission to humans occurs through contamination of bites or scratches with flea excrement.             There is no human-to-human transmission of CSD.

The duration of illness caused by B. henselae is usually 2 to 4 months with spontaneous recovery. TREATMENT-Supportive treatment & Antibiotics may be used for severely ill patients to speed recovery

6-Histoplasmosis (Histoplasma capsulatum)-it is an infection caused by a fungus called Histoplasma. The fungus lives in the environment, particularly in soil that contains large amounts of bird or bat droppings. In the United States, Histoplasma mainly lives in the central and eastern states, especially areas around the Ohio and Mississippi River valleys. The fungus also lives in parts of Central and South America, Africa, Asia, and Australia.

People can get histoplasmosis after breathing in the microscopic fungal spores from the air. Although most people who breathe in the spores don’t get sick, those who do may have a fever, cough, and fatigue. Many people who get histoplasmosis will get better on their own without medication, but in some people, such as those who have weakened immune systems, the infection can become severe.

6-Coccidiomycosis (Valley Fever)-Valley fever, also called coccidioidomycosis, is an infection caused by the fungus Coccidioides. The fungus is known to live in the soil in the southwestern United States and parts of Mexico and Central and South America. The fungus was also recently found in south-central Washington. People can get Valley fever by breathing in the microscopic fungal spores from the air, although most people who breathe in the spores don’t get sick. Usually, people who get sick with Valley fever will get better on their own within weeks to months, but some people will need antifungal medication.

People usually get intestinal illnesses (foodborne illnesses like E. coli O157:H7, Campylobacter, Salmonella, Cryptosporidium) from food and water. But, you can also get any of these from contact with animals or their environments.

In recent years, intestinal diseases associated with places where the public has contact with farm animals (e.g., petting zoos, state or county fairs, educational farms) have been identified with increasing frequency. Minnesota is no exception to this trend.

Keeping Backyard Poultry-An increasing number of people around the country are choosing to keep poultry, such as chickens or ducks, as part of a greener, healthier lifestyle. While you enjoy the benefits of backyard chickens and other poultry, it is important to consider the risk of illnesses, especially in children, that can result from handling live poultry or anything in the area where they are kept.

Staying safe at pet zoos or animal fairs-From mid-June to Labor Day is fair season in Minnesota. Each year, fairs across the state provide opportunities to eat deep fried delicacies and interact with livestock and poultry. But these interactions aren’t without risk — animals can carry germs that can make people sick. The risk can be minimized with careful handwashing and taking a few simple precautions.

8-Salmonella- Some Reptiles and Amphibians-They can make cool pets, but they can also be a source of illness. Reptiles (e.g., Iguanas, turtles, snakes) and amphibians (e.g., frogs and toads) carry Salmonella.

Salmonella-Chicks and Ducklings:
Those cute little chicks and ducklings can be a great attraction for children this time of year, but they can also be a source of illness, so it’s important for those who handle them to take steps to prevent infection.