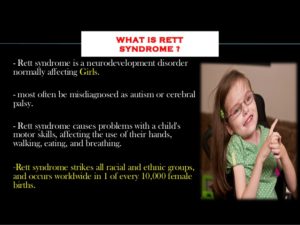 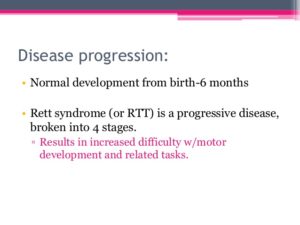 Rett syndrome is a rare non-inherited genetic postnatal neurological disorder that occurs almost exclusively in girls and leads to severe impairments, affecting nearly every aspect of the child’s life: their ability to speak, walk, eat, and even breathe easily. The hallmark of Rett syndrome is near constant repetitive hand movements while awake. Cognitive assessment in children with Rett syndrome is complicated, but we know that they understand far more than they can communicate to us, evidenced by their bright and attentive eyes, and their ability to express a wide spectrum of moods and emotions.

In 1954, Dr. Andreas Rett, a pediatrician in Vienna, Austria, first noticed two girls as they sat in his waiting room making the same repetitive hand-washing motions.  Brett syndrome is a unique postnatal neurological disorder that is first recognized in infancy and seen almost always in girls, but can be rarely seen in boys.

This neurological disorder is where there is a mutation in a single gene, the MECP2 gene.

The MECP2 gene provides instructions for making a protein called MeCP2. This protein helps regulate gene activity (expression) by modifying chromatin, the complex of DNA and protein that packages DNA into chromosomes. The function of DNA is the blueprint of biological guidelines that a living organism must follow to exist and remain functional. Medium of long-term, stable storage and transmission of genetic information.The MeCP2 protein is present in cells throughout the body, although it is particularly abundant in brain cells.

In the brain, the MeCP2 protein is important for the function of several types of cells, including nerve cells (neurons). The protein likely plays a role in maintaining connections (synapses) between neurons, where cell-to-cell communication occurs.

Many of the genes that are known to be regulated by the MeCP2 protein play a role in normal brain function, particularly the maintenance of synapses BUT the MeCP has a permanent alteration in it so if effects the DNA and there won’t be normal function.

Affecting only children because this happens during fetal development when are DNA/RNA and genes are made up.  This won’t happen in adulthood, your RNA, DNA and genes won’t change at that age.

Rett Syndrome is genetically based and is a very rare condition, but there is no known cure. This is a life-long condition. You can’t repair mutated genes or someone’s DNA/RNA.

Symptoms can be managed, and early detection is the key to making it easier on both the child affected and their families, but the patient will need constant care for the rest of their lives.

Often akin to the symptoms of severe autism, it is important to differentiate between the two diseases to get a correct diagnosis.