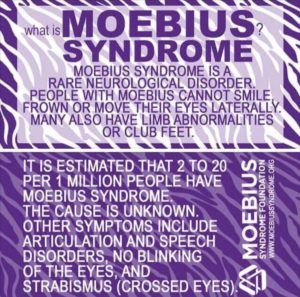 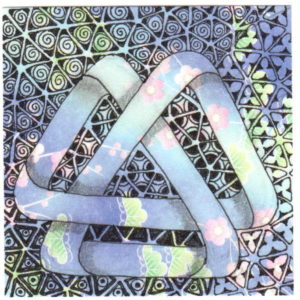 Most cases of Moebius syndrome occur randomly for unknown reasons (sporadically) in the absence of a family history of the disorder. The syndrome is listed as Online Mendelian Inheritance in Man (OMIM) Number 15700, with a gene map locus of 13q12.2-q13. Sporadic mutations in PLXND1 and REV3L genes have also been identified in a number of patients and confirmed to cause a constellation of findings consistent with Moebius syndrome when introduced in animal models.

In rare cases, familial patterns have been reported. Most likely, Moebius syndrome is multifactorial, which means that both genetic and environmental factors play some causative role. It is possible that in different cases there are different underlying causes (heterogeneity).
In familial cases, there is evidence that Moebius syndrome is inherited as an autosomal dominant trait. Dominant genetic disorders occur when only a single copy of an abnormal gene is necessary for the appearance of the disease. The abnormal gene can be inherited from either parent, or can be the result of a new mutation (gene change) in the affected individual. The risk of passing the abnormal gene from affected parent to offspring is 50% for each pregnancy regardless of the sex of the resulting child.

The spectrum of findings in Moebius syndrome suggests a developmental defect of the hindbrain. Several different theories have been proposed to explain the cause of Moebius syndrome. One hypothesis is the disorder is the result of diminished or interrupted blood flow (ischemia) to the developing fetus during pregnancy (in utero). Recent research suggests that the lack of blood affects certain areas of the lower brainstem that contain the cranial nerve nuclei. This lack of blood flow could result from an environmental, mechanical or genetic cause. Nevertheless, cause of the syndrome remains inconclusive and more basic and clinical research is necessary.

Moebius syndrome affects males and females in equal numbers. The disorder is present at birth (congenital). The exact incidence and prevalence rates of Moebius syndrome are unknown. One estimate places the incidence at 1 case per 50,000 live births in the United States.

The treatment of Moebius syndrome is directed toward the specific abnormalities in each individual. Usually these children are managed by a multidisciplinary team, often in a craniofacial center. Involved specialists include: pediatricians; neurologists; plastic surgeons; ear, nose, and throat specialists (otolaryngologists); orthopedists; dental specialists; speech pathologists; specialists who assess and treat hearing problems (audiologists), specialists who treat eye abnormalities (ophthalmologists) and other healthcare professionals.

Corrective procedures for facial paralysis involve transfer of muscle and/or graft nerves from another area of the face or the body.

Splints, braces and prostheses may be necessary for individuals with congenital limb abnormalities. Genetic counseling may be of benefit for affected individuals and their families.