“Stress is your body’s way of responding to any kind of demand or threat. When you sense danger—whether it’s real or imagined—the body’s defenses kick into high gear in a rapid, automatic process known as the “fight-or-flight” reaction or the “stress response“.

“Ablation is used to treat abnormal heart rhythms, or arrhythmias. The type of arrhythmia and the presence of other heart disease will determine whether ablation can be performed surgically or non-surgically.” 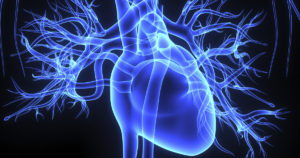 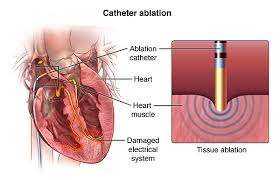 Ablation is used to treat abnormal heart rhythms, or arrhythmias. The type of arrhythmia and the presence of other heart disease will determine whether ablation can be performed surgically or non-surgically.

Ablation therapy using radio frequency waves on the heart is used to cure a variety of cardiac arrhythmiae such as supraventricular tachycardia, Wolff–Parkinson–White syndrome (WPW), ventricular tachycardia, and more recently as management of atrial fibrillation (especially when its newly diagnosed when medical management can’t change it back to normal sinus rhythm, which is the normal cardiac rhythm seen on a telemetry monitor or of an EKG taken on a patient).

An arrhythmia is a change in the heart’s normal rate or rhythm, normally between 60 and 100 beats per minute. Arrhythmias are classified by their location in the heart and by their speed or rhythm. An atrial arrhythmia is an abnormality that occurs in one of the two upper chambers of the heart, the left or right atrium. Arrhythmias are associated with aging and typically happen more frequently during middle age. At least 10 to 15 percent of people older than 70 years experience arrhythmias.  We have what we call our human pacemaker of the heart that naturally sends conduction for the heart to pump, which is called the sinus node.  This is in the upper left corner of the right chamber of the heart.  That is where the name sinus rhythm derives from (the sinus node) which is the best rhythm a human can be in as long as the pulse rate stays above 60 and stays under 100. Now if that sinus node for some reason breaks down and no longer works; so than the pace site starts somewhere in the right atrium below the sinus node (the heart is compensating for whatever is the reason the sinus node is not working).  So now the rhythms are called atrial rhythms because of where the new natural pacemaker site is in the heart.  This is where ablation comes into play if the type of atrial rhythm they have is detrimental to the patient; including if that patient is a candidate for this procedure.  Between our heart chambers on the top (called atriums) and below (called the ventricles) is a AV (meaning atrioventricular valve).  Rhythms above the ventricles are also grouped as supraventricular rhythms.  Which is what ablation is used for.

Types of rhythms a patient would be considered for ablation as a possible treatment:

Atrial fibrillation. The electrical signal that circles uncoordinated through the muscles of the atria (the upper chambers of the heart), causing them to quiver (sometimes more than 400 times per minute) without contracting. The ventricles (the lower chambers of the heart) do not receive regular impulses and contract out of rhythm, and the heartbeat becomes uncontrolled and irregular. It is the most common atrial arrhythmia, and 85 percent of people who experience it are older than 65 years.

Premature atrial contraction (PAC or premature atrial impulses). A common and benign arrhythmia, a PAC is a heartbeat that originates away from the sinus node, which sends electrical signals through the upper chamber. It typically occurs after the sinus node has initiated one heartbeat and before the next regular sinus discharge. A PAC can cause a feeling of a skipped heartbeat. Use of caffeine, tobacco, and/or alcohol, or stress can bring on PACs or increase their frequency.

Supraventricular tachycardia (SVT). Characterized by a rapid heart rate that ranges between 100 and 240 beats per minute, SVT usually begins and ends suddenly. SVT occurs when an electrical impulse ‘re-enters’ the atrial muscles. A disorder that a person may have at birth, SVT is commonly caused by a variation in the electrical system of the heart. SVT often begins in childhood or adolescence and can be triggered by exercise, alcohol, or caffeine. SVT is rarely dangerous, but can cause a drop in blood pressure, causing lightheadedness or near-fainting episodes, and, rarely, fainting episodes.

Sick sinus syndrome (SSS). Common among older people, SSS is an improper firing of electrical impulses caused by disease or scarring in the sinus or Sinoatrial node (SA node). SSS normally causes the heart rate to slow, but sometimes it alternates between abnormally slow and fast. A progressive condition, with episodes increasing in frequency and duration, SSS can be caused by:

Sinus bradycardia. Associated with impaired impulse generation in the SA node, it causes the heart rate to decrease to fewer than 60 beats per minute. Commonly caused by SSS, drugs like beta-blockers and calcium-channel blockers can also cause sinus bradycardia. Occasionally sinus bradycardia can be caused by impaired conduction of impulses to the atrial muscles.

Occasionally, impulses can go down one extra pathway and up another, creating a “loop” or “short circuit,” (called SVT because of WPW). Patients with WPW syndrome may develop atrial fibrillation and are at increased risk for developing a dangerous ventricular arrhythmia when this occurs.

Problems with the heart’s electrical system or with the muscles’ response to the signal can cause arrhythmias. Physicians have categorized arrhythmias to their type:

People without heart disease can develop an arrhythmia for unknown causes, but risk factors can include:

WHAT ARE THE SYMPTOMS?

The onset and duration of arrhythmia symptoms vary according to its type, frequency, duration, and whether structural heart disease is present.

Common symptoms that people experience may include:

Certain arrhythmias may cause fainting, and, occasionally stroke, while others (‘silent’ arrhythmias) cause no symptoms.

Arrhythmias can be difficult to diagnose because they can be unpredictable and brief. A physician will typically take a person’s medical history, and perform a physical examination, during which the physician may detect an arrhythmia using a stethoscope. Arrhythmias that occur infrequently, last for short periods of time, or do not cause noticeable symptoms may require more detailed tests, such as:

“Acne is the most common skin condition in the United States. Although it’s common, accurate information about acne can be scarce.”

“Diabetes Mellitus (DM) is a complex chronic disease involving disorders in carbohydrate, protein, and fat metabolism and the development of macro-vascular, micro-vascular, neurological complications that don’t occur over a few nights or weeks or months.”

“We have an many enzymes in our body from our saliva to our pancrease. Enzymes are specialized proteins that are produced by living cells to catalyze reactions in the body=breakdown.”

“Pneumonia does not have effective advocacy.It is not the subject of fund-raising walks or runs. It does not have a ribbon or other symbol around which people rally. It does not get the attention it needs from biomedical scientists or from research funders. More effort is needed now.”

QUOTE FOR THE WEEKEND:

“Amyloidosis (am-uh-loi-DO-sis) is a rare disease that occurs when a substance called amyloid builds up in your organs.”

“Cardiac arrest is the abrupt loss of heart function in a person who may or may not have diagnosed heart disease.”