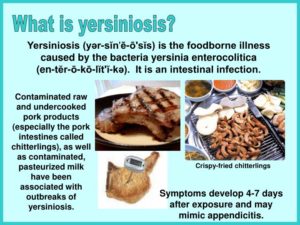 Yersiniosis is an infection caused most often by eating raw or undercooked pork contaminated with Yersinia enterocolitica bacteria. CDC estimates Y. enterocolitica causes almost 117,000 illnesses, 640 hospitalizations, and 35 deaths in the United States every year. Children are infected more often than adults, and the infection is more common in the winter.

Yersinia are bacteria that can cause illnesses in humans.

Yersiniosis refers to the illnesses caused by Y. enterocolitica and less often by Y. pseudotuberculosis infections.

The symptoms of yersiniosis depend on the age of the person infected. Infection occurs most often in young children. Common symptoms in children are fever, abdominal pain, and diarrhea, which is often bloody. Symptoms typically develop 4 to 7 days after exposure and may last 1 to 3 weeks or longer. In older children and adults, right-sided abdominal pain and fever may be the predominant symptoms and may be confused with appendicitis. Complications are rare, and may include skin rash, joint pains, or spread of bacteria to the bloodstream.

CDC estimates that infections with Yersinia enterocolitica cause almost 117,000 illnesses, 640 hospitalizations, and 35 deaths in the United States every year. Children are infected more often than adults, and the infection is more common in the winter.

How Humans get this illness:

Most people become infected by eating contaminated food, especially raw or undercooked pork, or through contact with a person who has prepared a pork product, such as chitlins. For example, babies and infants can be infected if their caretakers handle contaminated food and then do not wash their hands properly before handling the child or the child’s toys, bottles, or pacifiers.

People occasionally become infected after drinking contaminated milk or untreated water, or after contact with infected animals or their feces.

On rare occasions, people become infected through person-to-person contact. For example, caretakers can become infected if they do not wash their hands properly after changing the diaper of a child with yersiniosis.

Even more rarely, people may become infected through contaminated blood during a transfusion.

How this illness is diagnosed:

Yersiniosis usually is diagnosed by detecting the bacteria in the stool of an infected person. Many laboratories do not routinely test for Yersinia, so it is important that the clinician notifies the laboratory when yersiniosis is suspected so that special tests can be done.

The long-term consequences of yersiniosis:

Most symptoms go away completely. However, some people may experience the following:

How you can protect yourself and the family from this infection?

1-Care in patients with this illness infection is primarily supportive, with good nutrition and hydration being mainstays of treatment.

2-First-line drugs used against the bacterium include aminoglycosides and trimethoprim-sulfamethoxazole (TMP-SMZ). Other effective drugs include third-generation cephalosporins, tetracyclines (not recommended in children under 8 y), and fluoroquinolones (not approved for use in children under 18 y).