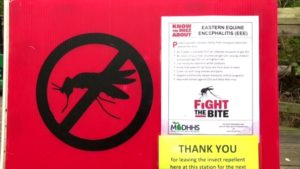 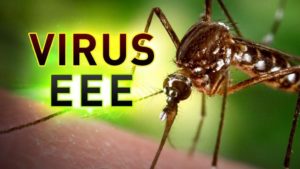 What is eastern equine encephalitis (EEE)?

Eastern equine encephalitis (EEE) belongs to a category of viruses known as arboviruses, or arthropod-borne viruses. Arboviruses are spread by the bites of blood-sucking insects, such as mosquitos and ticks. EEE is spread by the bite of certain kinds of mosquitoes.

What are the risk factors of EEE?

The overall risk of becoming infected with EEE depends on:

Some people with EEE may develop a severe infection that causes brain tissue to become inflamed (encephalitis).The factors that increase one’s risk of getting a severe EEE infection include:

What are the symptoms of EEE?

Symptoms of EEE generally occur four to 10 days after a person has been infected and include:

The symptoms of encephalitis depend on the part of the brain that is inflamed, the amount of inflammation and the person’s age and overall health.

Some of the most common symptoms of encephalitis include:

In one-third of cases, encephalitis can be fatal or lead to permanent brain damage.

Because the initial symptoms of EEE resemble those caused by many illnesses, it may be difficult to determine if a child’s symptoms are related to encephalitis. In general, you should take your child to see a doctor if your child has a bad headache, nausea and vomiting, fever or any worrisome changes in behavior (confusion, extreme sleepiness, acting very different, listlessness, lethargy, seizures).

The worst outbreak of eastern equine encephalitis since U.S. health officials began monitoring the mosquito-borne disease 15 years ago is prompting aerial bug spraying and dire warnings to avoid the biting insects well into fall. As of October 1, 31 cases — including nine deaths — have been reported by the U.S. Centers for Disease Control and Prevention.

Known as EEE or Triple-E for short, the incurable brain infection is still relatively rare — there have been only 103 reported infections in the United States in the past decade. Only five percent of people bitten by an infected mosquito will develop the disease. But about a third of EEE patients die, and many who survive experience permanent neurological problems.

Science News spoke with several researchers about how the virus spreads, and possible factors that might be contributing to the recent surge in cases.

“We don’t know some of the basic details about these [mosquito-transmitted] diseases, unfortunately,” says pathobiologist Stephen Higgs, director of the Biosecurity Research Institute at Kansas State University in Manhattan. “The ideal is to anticipate outbreaks, which is very, very difficult. But we need to be prepared for an outbreak when it comes.”