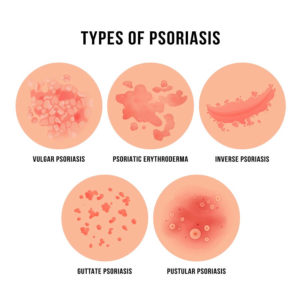 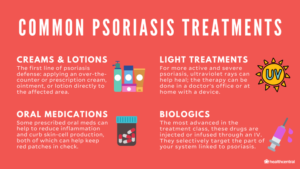 If you suspect that you may have psoriasis, see your doctor for an examination. Also, talk to your doctor if your psoriasis:

Seek medical advice if your signs and symptoms worsen or don’t improve with treatment. You may need a different medication or a combination of treatments to manage the psoriasis.

The cause of psoriasis isn’t fully understood, but it’s thought to be related to an immune system problem with T cells and other white blood cells, called neutrophils, in your body.

T cells normally travel through the body to defend against foreign substances, such as viruses or bacteria.

But if you have psoriasis, the T cells attack healthy skin cells by mistake, as if to heal a wound or to fight an infection.

The process becomes an ongoing cycle in which new skin cells move to the outermost layer of skin too quickly — in days rather than weeks. Skin cells build up in thick, scaly patches on the skin’s surface, continuing until treatment stops the cycle.

Psoriasis typically starts or worsens because of a trigger that you may be able to identify and avoid. Factors that may trigger psoriasis include:

Anyone can develop psoriasis, but these factors can increase your risk of developing the disease:

If you have psoriasis, you’re at greater risk of developing certain diseases. These include: