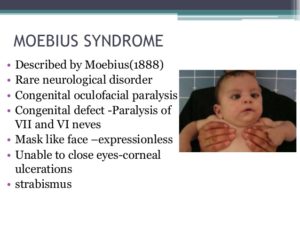 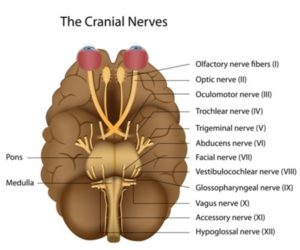 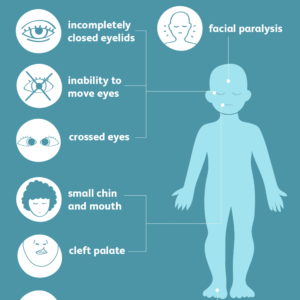 Moebius syndrome is a rare neurological disorder characterized by weakness or paralysis (palsy) of multiple cranial nerves, most often the 6th (abducens) and 7th (facial) nerves. Other cranial nerves are sometimes affected. The disorder is present at birth (congenital). If the 7th nerve is involved, the individual with Moebius syndrome is unable to smile, frown, pucker the lips, raise the eyebrows, or close the eyelids. If the 6th nerve is affected, the eye cannot turn outward past the midline. Other abnormalities include underdevelopment of the pectoral muscles and defects of the limbs. Moebius syndrome is not progressive. The exact cause is unknown. It appears to occur randomly (sporadically) in most cases; however, some cases occur in families suggesting that there may be a genetic component.

Congenital facial and abducens palsy was first described by Von Graefe (1880) and Moebius (1888), a German neurologist after whom the syndrome was later named.

The abnormalities and severity of Moebius syndrome vary greatly from one person-to-another. The classically accepted diagnostic criteria include: 1) facial paralysis or weakness affecting at least one but usually both sides of the face (7th cranial nerve), 2) paralysis of sideways (lateral) movement of the eyes (6th cranial nerve); and 3) preservation of vertical movements of the eyes. Less often, other cranial nerves, including the 5th, 8th, 9th, 10th, 11th, and 12th may be affected.

Infants with Moebius syndrome may drool excessively and exhibit crossed eyes (strabismus). Because the eyes do not move from side-to-side (laterally), the child is forced to turn the head to follow objects. Infants who lack facial expression often are described as having a “mask-like” face that is especially obvious when laughing or crying. Affected infants may also have difficulties feeding, including problems swallowing and poor sucking. Corneal ulceration may occur because the eyelids remain open during sleep.

There are a wide variety of additional abnormalities. Some children with Moebius syndrome have a short, malformed tongue and/or an abnormally small jaw (micrognathia). Cleft palate may also be present. These abnormalities contribute to feeding and breathing difficulties. Children with cleft palate are prone to ear infections (otitis media). There may be external ear anomalies including underdevelopment of the outer portion of the ear (microtia) or total absence of the outer portion of the ear (anotia). If the 8th cranial nerve is affected, there is likely hearing loss. Dental abnormalities are not uncommon. There is an increased risk for childhood cavities. Some affected children have difficulties with speech and delays in speech development.

Some affected children exhibit delay in attaining certain milestones such as crawling or walking, most likely due to upper body weakness; however, most children eventually catch-up. Moebius syndrome rarely is associated with minor intellectual disability. Some children have been classified as being on the “autistic spectrum”. The exact relationship between Moebius syndrome and autism is unknown. Some studies have suggested that autism spectrum disorders occur with greater frequency in children with Moebius syndrome; other studies have not confirmed this and suggest that any such relationship is overstated. Moebius syndrome is often associated with a variety of social and psychological consequences. The lack of facial expressions and the inability to smile can cause observers to misinterpret what an affected individual is thinking or feeling or intends. Although clinical anxiety and depression are not more common in children and adolescents with Moebius syndrome, affected individuals may avoid social situations due to apprehension and frustration.