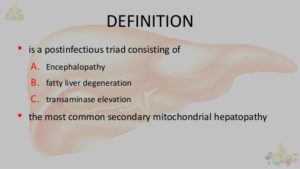 Reye’s syndrome is a rare but serious disease that causes swelling in the liver and brain. It can affect people of any age, but it is most often seen in children and teenagers recovering from a virus such as the flu or chickenpox.Studies have found that the main risk factor for Reye’s syndrome is taking aspirin or other related drugs, called salicylates.

Because of this, doctors recommend that children and teenagers recovering from viral infections should avoid taking aspirin.

Doctors don’t fully understand what causes Reye’s syndrome. They do know that some people are prone to get it when they take aspirin for a virus.

Others have a greater chance of getting it if they:

When Reye’s syndrome strikes, cells throughout your body become swollen and build up fats. In turn, your blood sugar levels drop. Ammonia and acid levels in the blood rise. These changes can hit many organs, such as the brain and liver, where severe swelling can occur.

The signs of Reye’s typically appear 3 to 5 days after the start of a viral infection.

Reye’s can be life-threatening. You should call 911 if you see these severe symptoms. Early diagnosis and treatment is crucial.

The syndrome can be mistaken for other conditions, including meningitis (a swelling of membranes covering the brain and spinal cord), a diabetes reaction, or poisoning.

Doctors don’t have a specific test for Reye’s. They usually do urine and blood tests. They also screen for disorders involving fatty acids.

Other tests may include:

Is There a Treatment?

There’s no single treatment that will stop Reye’s syndrome, but doctors can do some things to make sure it is managed. They can also try to prevent more severe symptoms and see that brain swelling is held down. These steps include: