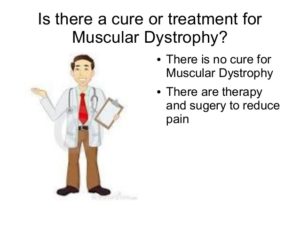 Currently, there is no cure for muscular dystrophy, but certain physical and medical treatments can improve symptoms and slow the disease’s progression.

is a group of diseases that make muscles weaker and less flexible over time. It is caused by a problem in the genes that control how the body keeps muscles healthy. For some people, the disease starts early in childhood. Others don’t have any symptoms until they are teenagers or middle-aged adults.

How muscular dystrophy affects you or your child depends on the kind. Most people’s condition will get worse over time, and some people may lose the ability to walk, talk, or care for themselves. But that doesn’t happen to everyone. Other people can live for many years with mild symptoms.

There are more than 30 kinds of muscular dystrophy, and each is different based on:

People usually get one of nine major forms of the disease:

There are many treatments that can help keep muscles strong and flexible, and scientists are looking for new ones, too.The important thing is to get the treatment you need and find support.