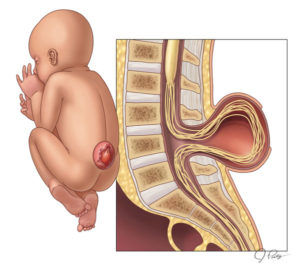 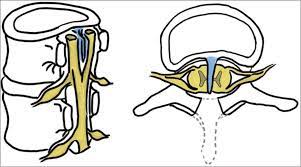 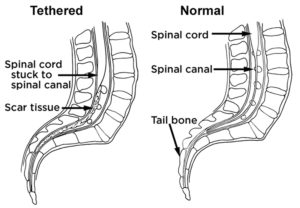 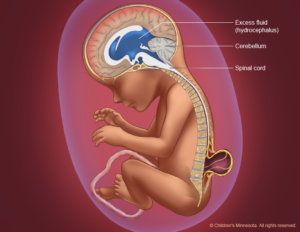 FETUS WITH HYDROCEPHALUS (shown above) 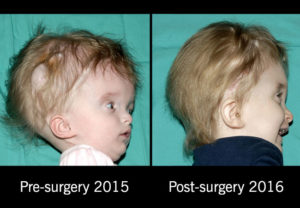 Spina Bifida is one of the causes of Tethered Spinal Cord and Hydrocephalus.

Tethered Spinal Cord is a stretch-induced functional disorder associated with the fixation (tethering) effect of inelastic tissue on the caudal spinal cord, limiting its movement. This abnormal attachment is associated with progressive stretching and increased tension of the spinal cord as a child ages, potentially resulting in a variety of neurological and other symptoms.

Spina bifida is a birth defect that affects the spine. Here are the latest national statistics on spina bifida in the United States:

1.)Each year, about 1,400 babies are born with spina bifida, or 1 in every 2,758 births, according to the U.S. Centers for Disease Control and Prevention. The exact cause of spina bifida is unknown. There is no cure but most people with spina bifida lead long and productive lives.

2.)Who it effects the most: Hispanic women have the highest rate of having a child affected by spina bifida, when compared with non-Hispanic white and non-Hispanic black women. Data from 12 state-based birth defects tracking programs were used to estimate the total number of pregnancies affected by spina bifida compared to the total number of live births (also called the prevalence of spina bifida) for each racial/ethnic group:

The symptoms listed below are some of the ways in which tethered spinal cord syndrome may be exhibited in children:

Spina bifida consequences that may occur:

The estimated lifetime cost of care for a person with spina bifida, with caregiving costs, is $791,900.

Learn tomorrow how you can prevent Spina Bifida with much more!